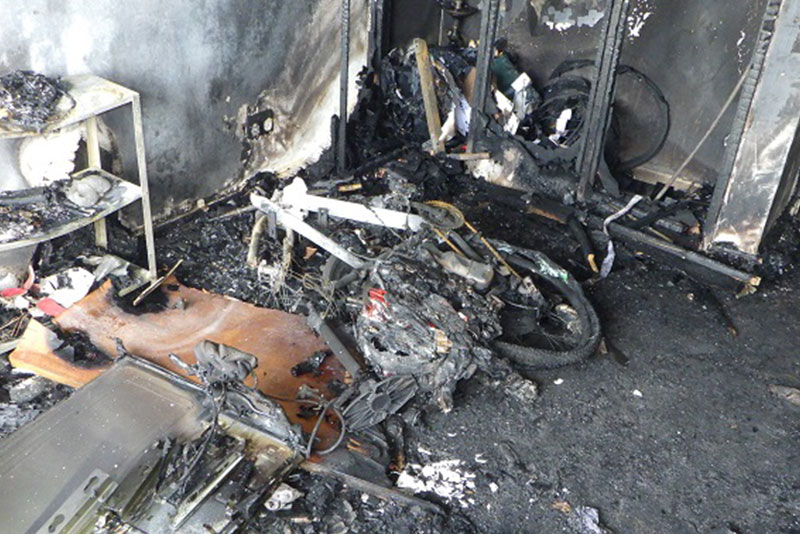 LFB said, “at the height of the incident, 60 firefighters were tackling the fire in a 12th floor flat. Fire crews led six people to safety and one man was taken to hospital.” The blaze was investigated by the Brigade’s fire investigators who have determined the blaze was accidental and caused by the failure of an e-bike lithium-ion battery.

The new widespread adoption of electric personal modes of transport has also been accompanied by a worrying increase in fires, London’s firefighters have seen a huge spike in incidents caused by these electric modes of transport. Just this year, crews have already attended 32 fires involving e-bikes and another 7 involving e-scooters. So far in 2022, there have been a further 17 fires involving other lithium-ion batteries and last year, in total there were more than 100 fires in the capital involving this type of battery.

The Brigade’s Assistant Commissioner for Fire Safety, Charlie Pugsley, said: “It’s incredibly concerning that we are continuing to see a rise in incidents involving e-bikes.

The advice from the Brigade is to never store e-bikes or e-scooters in communal areas as if they are involved in a fire, it can easily block the only means of escape.

If you are an e-scooter or e-bike owner living in London, Transport for London (TfL) banned e-scooters and e-bikes from the network at the end of 2021 following an incident in November which saw an e-scooter catch fire on a train stopped at an underground station.

How can you prevent or reduce the impact of an e-scooter or e-bike lithium battery fire?

The information contained within this blog is provided solely for general informational and educational purposes and is not intended as a substitute for professional advice. Before taking any actions based upon this information, we advise the reader to consult any and all relevant statutory or regulatory guidance and where felt necessary to consult a qualified fire or industry regulation professional. The use or reliance on any information contained herein is solely at the reader’s risk.