Are E-Scooters and similar devices the new major fire risk? 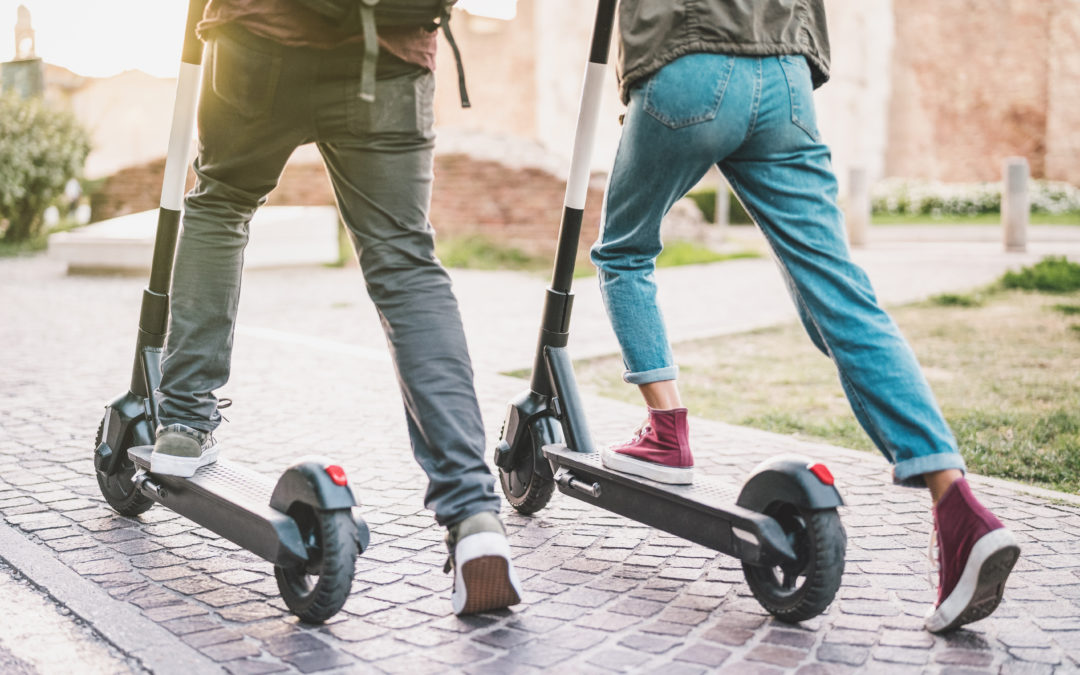 Are you aware of the dangers that electrical devices pose to us and those around us? Today, as we are all know, the move towards reducing the impact on the environment whilst retaining mobility has seen a big increase in electrically powered transport, which in addition to electric vehicles also includes personal modes of transport such as hoverboards, electric bikes and e-scooters. These items all carry major fire risks that need to be spoken about.

Historically, significant causes of fires and deaths in the domestic environment has shifted between the decades.  In the 1970’s and 80’s, emphasis was on the presence of paraffin heaters, electric blankets and most significantly, foam filled furniture in the home, while in the 1990’s it was the lack of smoke alarms for early warning and the 2000’s it was white goods, particularly tumble dryers. A number of these well-publicised risk factors have had a key part to play in the development of contemporary fire safety legislation.

The new widespread adoption of electric personal modes of transport has also been accompanied by a worrying increase in fires resulting in substantial property loss, injuries, and several deaths. With an estimated 200,000 scooters already in use in the UK and the number rapidly increasing, the risk of further fire related incidents also escalates.

Transport for London’s ban on private e-scooters, prevents them from being taken onto the capital’s transport network, came into force at the end of 2021, following an incident in November which saw an e-scooter catch fire on a train stopped at an underground station.

This growing issue has been of significant concern with Fire and Rescue Services across the UK for some time. In 2021 firefighters in England attended more than 50 blazes as a result of e-scooters or e-bikes, in comparison to 2020 which saw half that amount for the whole year.  This prompted London Fire Brigade to issue an urgent safety warning.

The battery technology is at the heart of the issue with energy-dense Lithium-ion battery packs normally being used in these rechargeable devices.

So why are Lithium batteries a fire risk?

To understand the risk, you need to know a little bit about Lithium batteries.  With a single cell Lithium battery, once the cell has released all of its energy, the battery has finished its life.  However, the Lithium-Ion batteries used in devices such as mobile phones, laptops, power tools, and electric vehicles (EVs), have a larger number of cells (ranging from two to thousands) and can be recharged many times.

What causes Lithium battery fires and what is Thermal Runaway?

The failure of a Lithium battery is usually due to a short circuit or damage from overcharging, overheating, penetration or crushing.

Warning signs that a battery pack or cell is likely to fail include the battery appearing to bulge or swell, sometimes accompanied by other signs such as discharging too fast and/or the battery being hot to the touch.

Once a battery fails or ‘runs away’ the cells usually start to give off smoke.  Thermal runaway is the chemical process within the battery which produces heat and flammable toxic chemical gases very quickly, often before any flame appears.

For more information about thermal runaway and what causes Lithium battery fires, visit our website. 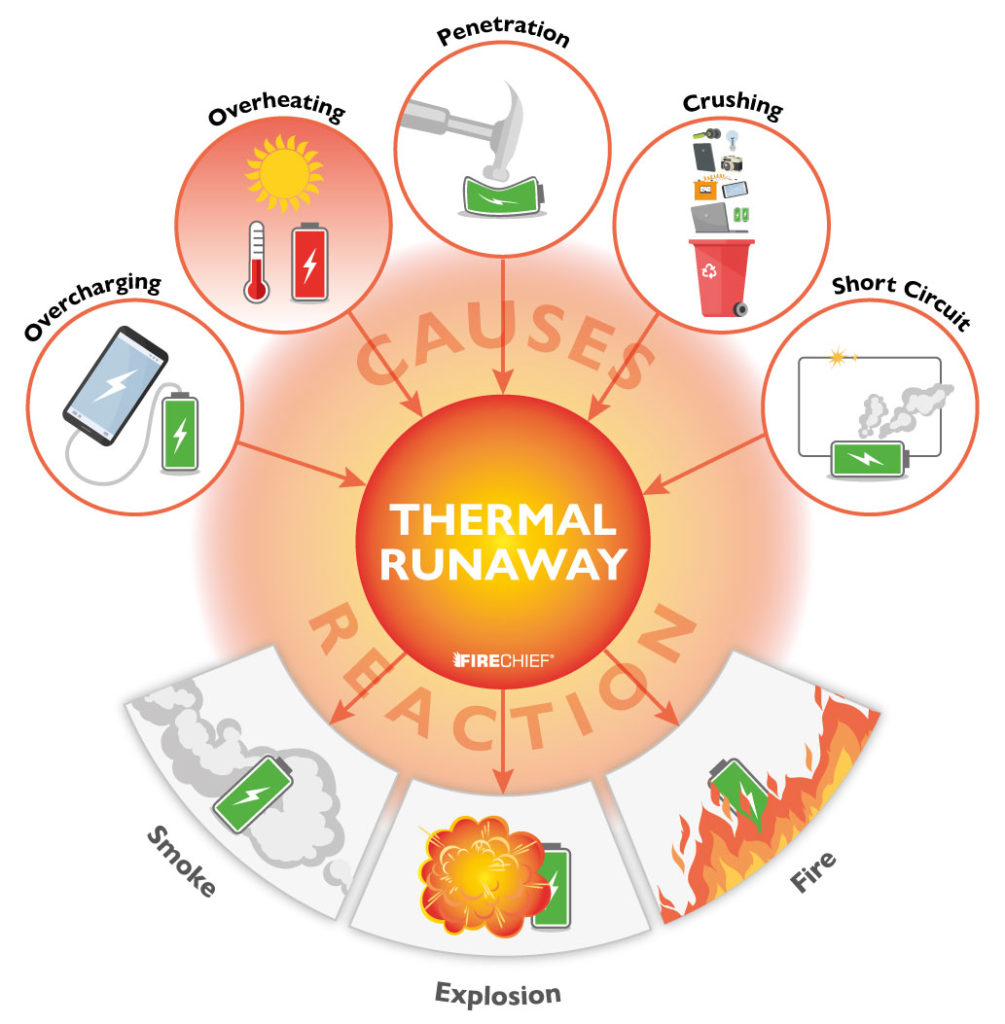 What to use on Lithium battery fires?

Firechief Lith-Ex extinguishers have been designed to suppress Lithium battery fires in their infancy before they develop into a fully established fire.  They can also be used to protect against fires where batteries are stored or charged.

Firechief Lith-Ex extinguishers contain Aqueous Vermiculite Dispersion (AVD), a revolutionary fire extinguishing agent.  AVD is made up of Vermiculite particles chemically suspended in water, discharged in a fine mist which provides both a cooling effect and forms a heatproof barrier around the burning battery cell to prevent propagation and re-ignition.  Vermiculite has strong thermal insulation properties and therefore prevents heat transfer from the burning cell to its surroundings.

The Firechief Lithium Battery Safety Range also includes Heavy Duty Lithium Battery Fire Blankets, Fire Suppression Kits and Fire-Resistant Containers which are designed for the safe storage and transit of Lithium batteries and the smaller devices which contain them.  You can view these products on our website. 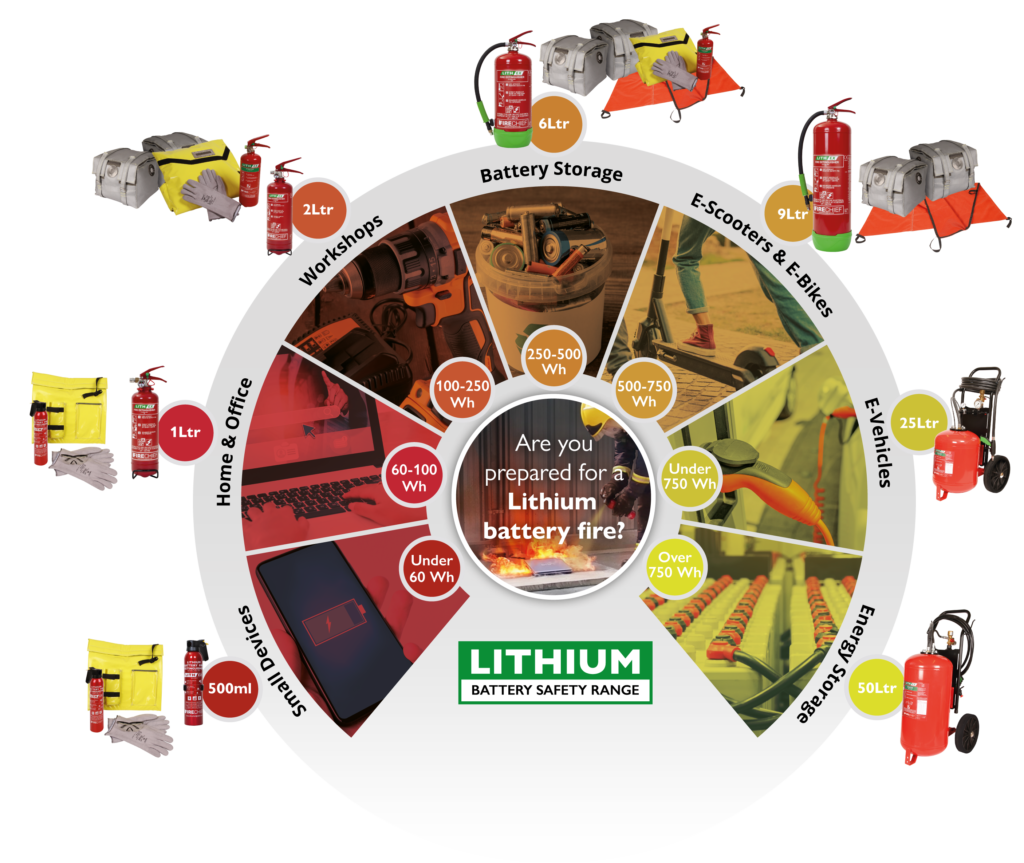 How can you prevent or reduce the impact of an e-Scooter Lithium battery fire?

For further information about Lithium battery fires and how to manage them, see us on stand number FI2224 at FIREX or visit our website Lithium Battery Safety Range – Firechief Global

The information contained within this blog is provided solely for general informational and educational purposes and is not intended as a substitute for professional advice. Before taking any actions based upon this information, we advise the reader to consult any and all relevant statutory or regulatory guidance and where felt necessary to consult a qualified fire or industry regulation professional. The use or reliance on any information contained herein is solely at the reader’s risk.